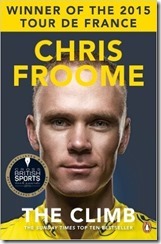 I’m currently working my way through Tour de France 2015 Winner Chris Froome’s book, The Climb. There are many interesting stories in the book but this is one of the first ones I thought I would write a post on as it’s pretty funny. Whilst racing in the 2012 Tour de France Chris makes a hilarious mistake during the Prologue. Here’s an excerpt from the book of this story:-

First things first. I need a good ride in tomorrow’s prologue. To show them I am ready.

Next morning I speak with Gary Blem, who has prepared my time-trial bike. Gary talks me through the changes and they all seem good. At the bus I’ve got an hour and a half till my start time. I’ve planned this to the last detail so I don’t end up waiting at the start line, which is almost as bad as running late.

I put on my skinsuit bottoms for the warm-up but don’t pull the upper section over my torso. That would make me too hot on the turbo trainer. I wear an undervest for collecting sweat, then a light mountain jersey with a pocket for my iPhone. During the warm-up I will turn on my music and shut out everything else.

I check my time-trial helmet, fastening the strap to the right length so I won’t have to adjust it later. I lay it on my seat. Holding the visor up to the light, I look for any marks that need to be cleaned. Then I fiddle with the magnets to make sure they are where they should be to hold the visor in place. Gloves are placed on my seat. Shoe covers ready.

I then soak two small pieces of cotton wool in Olbas Oil, stuff them up my nostrils, draw air through my nose and wait for the oil to start clearing my airways. A quick espresso and I’m ready for the turbo trainer. The team has set up the trainer on a specially built platform beside the bus; uneven ground can ruin a warm-up.

This warm-up; I could do it in my sleep. To do it right demands concentration. Think, get it right. I start with 3 minutes of easy pedalling. Then an 8-minute progression to threshold. At threshold I’m producing a power I can sustain for up to an hour — over 400 watts. I dance to the numbers coming up on the display fixed to the handlebars.

Two minutes of recovery are followed by a quicker 4-minute progression. As I start at 200 watts and need to get above 400, I increase my power output by 60 watts a minute until I hit 440.

I begin another 3 minutes’ recovery, then I do three accelerations, which are almost sprints: two in the saddle, one out. Each lasts 10 seconds and is followed by 50 seconds of recovery. I then keep my legs turning for another 3 or 4 minutes. At 25 minutes I stop; warm-up complete. It is 10 minutes until I roll down the start ramp.

Back on the bus I take off the top and the undershirt; I have a small towel ready to mop up the sweat. A soigneur will help get my torso into the skinsuit, making sure not to rip my race number. If it is pulled too high, the pins will snap; this is an art.

I gulp down a hydromax gel, the one that tastes of pineapple juice, then I pick up my gloves and helmet. I’m ready.

The starter counts me down: trois, deux, un, allez. Just 6.4 kilometres — too short for tactics but I still don’t want to set off too fast. Robbie Nilsen, from back in the day, has indoctrinated me: first ten per cent of a at ninety per cent capacity. I take one quick look at the SRM: 520 watts. That’s good but not crazy. I’m going fast and breathing really hard. Another glance at the SRM: my heart rate is up to 170, which is as high as mine goes. I can hear myself breathing.

I don’t know why it’s so loud because I feel I’m going okay. Short, flat time trials don’t suit me but this is not too bad. I keep pushing.

Right line into corners; nothing stupid. Fast and smooth; a kilometre to go. Empty it all now.

I zip through the finish where Szrekkie is waiting for me. I’m gasping for breath, struggling, but I can’t think why. As I try to breathe deeply I feel like I’ve gone anaerobic; my body has seized up. I’ve never been so wasted. So helpless.

I’d forgotten to take out the nose plugs before the start. I’d raced the whole prologue with them in, blocking my breathing. Thirty per cent of your breathing is done through your nose. I feel embarrassed. Really embarrassed. I’ve actually raced an okay prologue: 11th at 16 seconds down on Fabian Cancellara, a specialist in the short time trial. Brad is 2nd to Cancellara, 7 seconds down, and 9 seconds quicker than me.

But what has the blocked nose cost me? A few seconds, perhaps a little more. It definitely hasn’t helped. Brad’s 2nd place means the team is happy. No one makes much of a fuss about my mistake. Except the boys at the dinner table.

I’m one of the later ones to arrive for the meal. Bernie Eisel is sitting there with two paper napkins plugged into his nostrils. Funny. Genuinely funny. He looks at me.

‘What’s wrong’ he asks, all innocent, as if he’s unaware he’s got two two tissues up his nose.

Brilliant, I think, just brilliant. ‘Okay, guys, laugh it off ...’ My Tour de France has got off to the start I didn’t want.

After that incident is it any wonder he resorted to wearing the Turbine Nasal Dilator in the 2015 Tour de France?