A book that I’m presently reading is Revelations, it’s the biography of one of the top outdoor rock climbers in the 80’s, namely Jerry Moffatt. There are many interesting stories in the book but the one that I quite liked was the way he spent his 21st birthday climbing a 7C+ with Ben Moon at a well know roadside crag called Le Saussois in France.

Here’s an excerpt of the story: -

It was my twenty-first. Most people, on their twenty-first birthday, think about having a big party, or getting presents. I was on a dusty crag in a deserted corner of France, drinking water with just one friend. But I wouldn’t have been anywhere else. I had decided to flash Chimpanzodrome on my birthday and was beside myself with excitement. If I could pull this off, it would be the ultimate birthday imaginable. At the same time, failure would be horrific. The pressure was on. We got up early, walked the hour for bread and back, and on our return, were stunned to see the crag heaving with climbers. 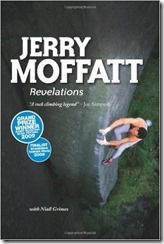 Sunday climbers had arrived from Paris and the normally deserted crag looked like a different place. The French were immaculate, with beautiful matching tops and bottoms, hair coiffured, perfect suntans and towelling headbands. Their karabiners all matched. They were also clean. We mingled with the Parisians like two dogs. Ben, with his pasty white skin, looked about fifteen. His long, black hair was starting to mat into dreadlocks. His clothes were filthy. I too had scruffr clothes, holes in my trousers, my hair dyed into black and red patches, punk style. We looked more like refugees than climbers.

We went over to our cave and got our gear on, and I warmed up by doing a 7b overhang, first go, which attracted some attention from the French. They watched us go over to Chimpanzodrome. At the time, I always climbed in my lucky swami-belt, a simple ribbon of webbing with no leg-loops, to keep myself light. I tied on to a single rope, 9mm in diameter, and fired the pitch off, first try. I ripped it to bits. Straight after, Ben too went up it once more, like a rat up a drainpipe. From there we went to L’Ange, a three pitch 7b+. I on-sighted that too. We came down. The French were stunned. We wandered to the sleeping cave, and as we had done everything that we wanted to do, packed our bags. We might as well head south. Au revoir.

As usual, hitching wasn’t easy. We made our way to the péage kiosk at the start of the Autoroute du Soleil. No one gave us a lift. The evening passed. It started getting cold and dark, and then, very quickly, a dense freezing fog descended. Within moments we were shivering, and with little chance of getting a lift, we unrolled our mats and sleeping bags and crawled in under the shelter of the péage. That was my twenty-first. In bed, sober at seven o’clock at night, with cars buzzing by at high speed fifty feet away, shivering in a freezing fog.

I was just so happy. It felt like the best climbing day I ever had, and, looking back on my career, if I were to pick one day that stood out above all others, then it would be this one.

I managed to find a YouTube clip of this particular climb which I found quite interesting since it seems the climber is wearing the same shoes that I am presently enjoying wearing, namely the Scarpa Instinct VS

Next entry: New heights for Reach Climbing Wall in London

Previous entry: Connecting to an SFTP Server with an FTP Client