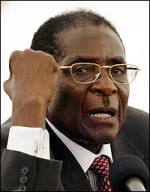 As a former Zimbabwean I was interested to see that Robert Mugabe has moved up in the Worlds 10 Worst Dictator listing, he’s now sitting at no. 4 after being ranked 9 last year. Quite an improvement and certainly a much deserved ranking after his regime continues to plunge the country into darkness. I’ll be surprised if he gets any higher than this in the rankings though, he’s got some pretty serious contender’s to beat if he wants to move up.

According to the Parade Magazine article a dictator can be defined as a head of state who exercises arbitrary authority over the lives of his citizens and who cannot be removed from power through legal means.


Next entry: Setting Up Blogjet for ExpressionEngine